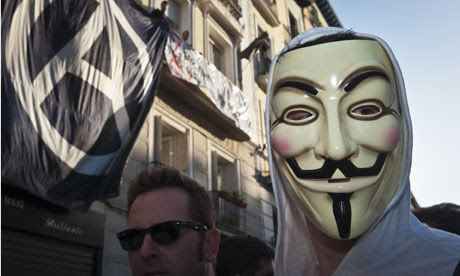 The loose-knit hacking movement Anonymous claims to have stolen thousands of credit card numbers and other personal information belonging to clients of US-based security thinktank Stratfor. One hacker said the goal was to pilfer funds from individuals' accounts to give away as Christmas donations, and some victims confirmed unauthorised transactions linked to their credit cards.

Anonymous boasted of stealing Stratfor's confidential client list – which includes entities including Apple, the US air force and the Miami police department – and mining it for more than 4,000 credit card numbers, passwords and home addresses.

Stratfor – based in Austin, Texas – provides political, economic and military analysis to help clients reduce risk, according to a description on its YouTube page. It charges subscribers for its reports and analysis, delivered through the web, emails and videos. The company's main website was down on Sunday, with a banner saying the "site is currently undergoing maintenance".

Proprietary information about the companies and government agencies that subscribe to Stratfor's newsletters did not appear to be at any significant risk, however, with the main threat posed to individual employees who had subscribed.

"Not so private and secret anymore?" Anonymous taunted in a message on Twitter, promising that the attack on Stratfor was just the beginning of a Christmas-inspired assault on a long list of targets.

Anonymous said the client list it had already posted was a small slice of the 200 gigabytes worth of plunder it stole from Stratfor, and promised more leaks. It said it was able to get the credit card details in part because Stratfor didn't bother encrypting them – an easy-to-avoid blunder which, if true, would be a major embarrassment for any security-related company.

Fred Burton, Stratfor's vice president of intelligence, said the company had reported the intrusion to law enforcement and was working with them on the investigation.

Stratfor has protections in place meant to prevent such attacks, he said.

"But I think the hackers live in this kind of world where once they fixate on you or try to attack you it's extraordinarily difficult to defend against," Burton added.

"Not as many as you expected? Worry not, fellow pirates and robin hoods. These are just the 'A's," read a message posted online that encouraged readers to download a file of the hacked information.

The attack is "just another in a massive string of breaches we've seen this year and in years past," said Josh Shaul, chief technology officer of Application Security, a New York-based provider of database security software.

Still, companies that shared secret information with Stratfor in order to obtain threat assessments might worry that the information is among the 200 gigabytes of data that Anonymous claims to have stolen, he said.

"If an attacker is walking away with that much email, there might be some very juicy bits of information that they have," Shaul said.

Lieutenant Colonel John Dorrian, public affairs officer for the US air force, said that "for obvious reasons" it doesn't discuss specific vulnerabilities, threats or responses to them.

"The air force will continue to monitor the situation and, as always, take appropriate action as necessary to protect networks and information," he said in an email.

A Miami police department spokesman said he could not confirm that the agency was a client of Stratfor, adding he had not received any information about a security breach involving the police department.

Anonymous also linked to images online that it suggested were receipts for charitable donations made by the group manipulating the credit card data it stole.

"Thank you! Defense Intelligence Agency," read the text above one image that appeared to show a transaction summary indicating that an agency employee's information was used to donate $250 to a non-profit organisation.

One receipt – to the American Red Cross – had Allen Barr's name on it.

Barr, of Austin, Texas, recently retired from the Texas Department of Banking and said he discovered last Friday that a total of $700 had been spent from his account. Barr, who has spent more than a decade dealing with cybercrime at banks, said five transactions were made in total.

"It was all charities, the Red Cross, CARE, Save the Children. So when the credit card company called my wife she wasn't sure whether I was just donating," said Barr, who wasn't aware until a reporter with the AP called that his information had been compromised when Stratfor's computers were hacked.

Wishing everyone a "Merry LulzXMas" – a nod to its spinoff hacking group Lulz Security – Anonymous also posted a link on Twitter to a site containing the email, phone number and credit card number of a US Homeland Security employee.

The employee, Cody Sultenfuss, said he had no warning before his details were posted.

"They took money I did not have," he told the Associated Press in a series of emails, which did not specify the amount taken. "I think 'Why me?' I am not rich."

But the breach doesn't necessarily pose a risk to owners of the credit cards. A card user who suspects fraudulent activity on his or her card can contact the credit card company to dispute the charge.

Stratfor said in an email to members that it had suspended its servers and email after learning that its website had been hacked.

"We have reason to believe that the names of our corporate subscribers have been posted on other web sites," said the email, signed by Stratfor Chief Executive George Friedman and passed on to AP by subscribers. "We are diligently investigating the extent to which subscriber information may have been obtained."

"Stratfor's relationship with its members and, in particular, the confidentiality of their subscriber information, are very important to Stratfor and me," Friedman wrote.

One member of the hacking group, who uses the handle AnonymousAbu on Twitter, claimed that more than 90,000 credit cards from law enforcement, the intelligence community and journalists – "corporate/exec accounts of people like Fox" News – had been hacked and used to "steal a million dollars" and make donations.

It was impossible to verify where credit card details were used. Fox News was not on the excerpted list of Stratfor members posted online, but other media organisations including MSNBC and Al-Jazeera English appeared in the file.

Anonymous warned it has "enough targets lined up to extend the fun fun fun of LulzXmas through the entire next week".

via guardian.co.uk
Posted by Apollo at 2:22 AM