Making small talk with your pot dealer sucks. Buying cocaine can get you shot. What if you could buy and sell drugs online like books or light bulbs? Now you can: Welcome to Silk Road.

About three weeks ago, the U.S. Postal Service delivered an ordinary envelope to Mark’s door. Inside was a tiny plastic bag containing 10 tabs of LSD. “If you had opened it, unless you were looking for it, you wouldn’t have even noticed,” Mark told us in a phone interview.

Mark, a software developer, had ordered the 100 micrograms of acid through a listing on the online marketplace Silk Road. He found a seller with lots of good feedback who seemed to know what they were talking about, added the acid to his digital shopping cart and hit “check out.” He entered his address and paid the seller 50 Bitcoins — untraceable digital currency — worth around $150. Four days later, the drugs (sent from Canada) arrived at his house.

“It kind of felt like I was in the future,” Mark said. 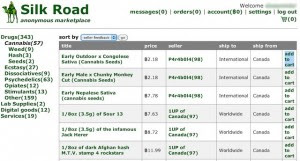 Silk Road, a digital black market that sits just below most internet users’ purview, does resemble something from a cyberpunk novel. Through a combination of anonymity technology and a sophisticated user-feedback system, Silk Road makes buying and selling illegal drugs as easy as buying used electronics — and seemingly as safe. It’s Amazon — if Amazon sold mind-altering chemicals.

Here is just a small selection of the 340 items available for purchase on Silk Road by anyone, right now: a gram of Afghani hash; 1/8 ounce of “sour 13″ weed; 14 grams of ecstasy; .1 gram tar heroin. A listing for “Avatar” LSD includes a picture of blotter paper with big blue faces from the James Cameron movie on it.

The sellers are located all over the world, a large portion from the United States and Canada.

But even Silk Road has limits: You won’t find any weapons-grade plutonium, for example. Its terms of service ban the sale of “anything who’s purpose is to harm or defraud, such as stolen credit cards, assassinations, and weapons of mass destruction.”

Getting to Silk Road is tricky. The URL seems made to be forgotten. But don’t point your browser there yet. It’s only accessible through the anonymizing network, TOR, which requires a bit of technical skill to configure.

Once you’re there, it’s hard to believe that Silk Road isn’t simply a scam. Such brazenness is usually displayed only by those fake “online pharmacies” that dupe the dumb and flaccid. There’s no sly, Craigslist-style code names here. But while scammers do use the site, most of the listings are legit. Mark’s acid worked as advertised. “It was quite enjoyable, to be honest,” he said. We spoke to one Connecticut engineer who enjoyed sampling some “silver haze” pot purchased off Silk Road. “It was legit,” he said. “It was better than anything I’ve seen.” 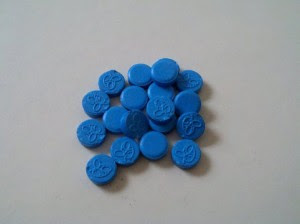 Silk Road cuts down on scams with a reputation-based trading system familiar to anyone who’s used Amazon or eBay. The user Bloomingcolor appears to be an especially trusted vendor, specializing in psychedelics. One happy customer wrote on his profile: “Excellent quality. Packing, and communication. Arrived exactly as described.” They gave the transaction five points out of five.

“Our community is amazing,” Silk Road’s anonymous administrator, known on forums as “Silk Road,” told us in an e-mail. “They are generally bright, honest and fair people, very understanding, and willing to cooperate with each other.”

Sellers feel comfortable openly selling hard-core drugs because the real identities of those involved in Silk Road transactions are utterly obscured. If the authorities wanted to ID Silk Road’s users with computer forensics, they’d have nowhere to look. TOR masks a user’s tracks on the site. As for transactions, Silk Road doesn’t accept credit cards, PayPal or any other form of payment that can be traced or blocked. The only money good here is Bitcoins.

Bitcoins have been called a “crypto-currency,” the online equivalent of a brown paper bag of cash. Bitcoins are a peer-to-peer currency, not issued by banks or governments, but created and regulated by a network of other bitcoin holders’ computers. (The name “Bitcoin” is derived from the pioneering file-sharing technology Bittorrent.) They are purportedly untraceable and have been championed by cyberpunks, libertarians and anarchists who dream of a distributed digital economy outside the law, one where money flows across borders as free as bits.

To purchase something on Silk Road, you need first to buy some Bitcoins using a service like Mt. Gox Bitcoin Exchange. Then, create an account on Silk Road, deposit some bitcoins, and start buying drugs. One bitcoin is worth about $8.67, though the exchange rate fluctuates wildly every day. Right now you can buy an 1/8 ounce of pot on Silk Road for 7.63 Bitcoins. That’s probably more than you would pay on the street, but most Silk Road users seem happy to pay a premium for convenience.

‘It kind of felt like I was in the future.’

Since it launched this February, Silk Road has represented the most complete implementation of the Bitcoin vision. Many of its users come from Bitcoin’s Utopian geek community and see Silk Road as more than just a place to buy drugs. Silk Road’s administrator cites the anarcho-libertarian philosophy of Agorism. “The state is the primary source of violence, oppression, theft and all forms of coercion,” Silk Road wrote to us. “Stop funding the state with your tax dollars and direct your productive energies into the black market.”

Mark, the LSD buyer, had similar views. “I’m a libertarian anarchist and I believe that anything that’s not violent should not be criminalized,” he said. 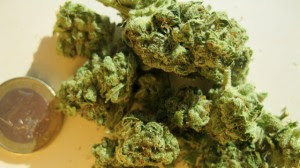 But not all Bitcoin enthusiasts embrace Silk Road. Some think the association with drugs will tarnish the young technology, or might draw the attention of federal authorities. “The real story with Silk Road is the quantity of people anxious to escape a centralized currency and trade,” a longtime bitcoin user named Maiya told us in a chat. “Some of us view Bitcoin as a real currency, not drug barter tokens.”

Silk Road and Bitcoins could herald a black market eCommerce revolution. But anonymity cuts both ways. How long until a DEA agent sets up a fake Silk Road account and starts sending SWAT teams instead of LSD to the addresses she gets? As Silk Road inevitably spills out of the bitcoin bubble, its drug-swapping utopians will meet a harsh reality no anonymizing network can blur.